So, E has been eyeing our food for a few weeks now. Ok, maybe even longer than that, but I just wasn't ready to accept that my little baby was ready for 'real' food.  I use quotations there because, let's face it, pureed peas are probably not going to make it onto my dinner table any time soon! But I digress. It's getting to the point that it is a little uncomfortable to eat around him. He leans in toward you, not blinking... just salivating, watching every single motion. Fork to plate. Fork to mouth. Fork to plate. Like a tennis match, this kid is hooked. So, ever so reluctantly, I decided it was time for this next milestone.

The first thing we ever fed C was avocado. She hated it. So, with E, I decided to go with something a bit more conventional. Peas. Yum.

I'll admit, as I opened the jar I thought, "Wow, better him than me!" That stuff just looks gross.

So, with camera in hand... We commenced our first feeding session.


Despite his lack of enthusiasm over his first meal, (i.e.- he started crying right after this picture) he has decided that maybe pureed peas aren't so bad after all. Now he reaches out and grabs my hand to pull the spoon faster to his mouth. I knew he'd come around!

Posted by Joanna at 4:24 PM No comments:

Every morning he wakes up smiling... 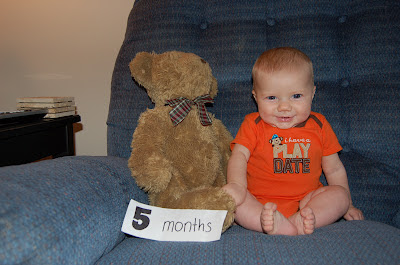 He loves his big sister.
He likes to reach out and touch your face.
He thinks mouth popping noises are hilarious.
He belly laughs.
He's only had pureed peas. He hate them at first. Now he can't get enough.
His hair is just long enough to spike. It's mostly blond, but starting to turn darker.
His cheeks and thighs are chubby.
He chews on his toes.
He likes his pacifier.
He has incredible blue eyes.
He rolls over.
He likes watching the cat.
He tries to escape the Bumbo.
He gets mad when he drops a toy.
He doesn't mind loud screeching, as long as it comes from his sister.
He gets up at least twice a night.
He drinks Gripe water like there is no tomorrow. We think he pretends to be uncomfortable just to get it! 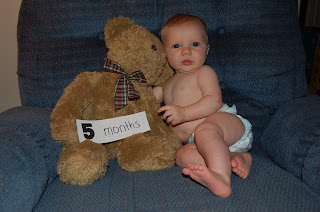 Posted by Joanna at 4:06 PM No comments:


In my opinion, Hand Foot and Mouth should be renamed... "extremely-high-fever-followed-a-day-later-with-nasty-painful-bumps-all-over-body-coinciding-with-extra-crankiness-then-followed-by-multiplying-rash-yet-endearing-temperament," or "EHFFADLWNPBAOBCWECTFBMRYET" (...for short...)

Hand Foot and Mouth had been going around like crazy all summer, and we had done well to avoid it in our house... until last week. C woke up with a fever on Monday which quickly escalated well over 104. With no other symptoms, we were at a loss as to what she had. She was eating and drinking normally. She wanted to play. She would just get very tired and lay down, fall asleep for about an hour and then wake up ready to go. As her temperature fluctuated all day, we decided to take her to the walk in hours at the doctor.

As there we no other symptoms, the doctor recommended testing for a uti. Apparently they are pretty common and very serious if not caught right away. I'm just hoping she doesn't remember what they had to do to determine that she did not in fact have a uti. I promised her french fries as a reward for the trauma she was going through. French fries are her favorite reward.

The next day her fever had come down and we thought she was on the mend... We were wrong. Toward the afternoon she was complaining about her mouth and she started to break out into spots on her face. They soon spread to her hands, arms, legs and diaper area. She started getting incredibly cranky and clingy. By then it was obvious what she had.

The strange thing about HFM, at least for C, is that as the rash has gotten worse, her temperament has gotten better. The past few days, she has been such a joy to be around. She smiles and chats and wants cuddles. She doesn't act uncomfortable (except for diaper changes). If she wasn't covered in spots, I would never know she was sick.

It has been quite a chore keeping her away from E, but so far he seems to have avoided it. We are still not out of the woods yet in terms of contagiousness, but hopefully he will stay healthy.

Posted by Joanna at 1:19 PM No comments: