I'll be honest, I think that most newborn babies are pretty ugly. Fresh from the womb, they still look all wrinkled and disfigured. They have odd shaped heads and crossed eyes and random bruises. Of course, over time they become much cuter, packing on rolls of baby fat and filling out more to that cuddly baby-ness that graces magazines and diaper commercials... But brand new, they're just ugly!
And sure enough, when Charlotte was born her face was puffy and splotchy, her eyes were squinty and her hands were white and wrinkled. She was skinny and boney and not at all cuddly. But I took one look at her and I thought, "Wow! That's the most beautiful thing I have ever seen!" I was hooked! 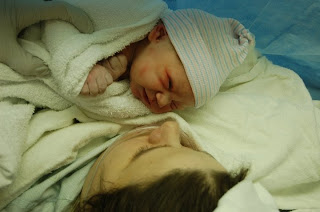 Now, I catch myself just staring at her, memorizing every detail of her little face and watching her transform from that splotchy little baby to the little girl I lay down to sleep each night... I don't want to forget anything.
So, here's a list of ten random things about Charlotte that I don't want to forget...
1. Charlotte has a mullet. She was born with it and it's still there.
2. She also has a bald spot on the back of her head where she rubbed all the hair off. This looks great with the above mentioned mullet.
3. Charlotte's hair is about 1.5 inches long, but she has one strand on the top of her head that is longer. It is about four inches long.
4. Charlotte has blue eyes, except for the bottom corner of her left eye. It's brown. It's been that way since birth.
5. Charlotte burps like a teenage boy.
6. Charlotte has a double chin. There are days when we don't even see her neck because of it. It is slowly taking over.
7. Charlotte's first tooth is beginning to peak through her gumline. It's on the bottom right front.
8. Charlotte has fingernails that rival a velociraptor... She goes straight for your jugular.
9. Charlotte has massively large cheeks. At least an inch thick.
10. Charlotte has an incredibly manipulative lower lip. When she gets upset, it puckers out and a more pathetic and sad looking creature has never been seen!!
Posted by Joanna at 10:42 PM 1 comment: