Well, this pregnancy is officially in full swing!

Current cravings... (yes, there are more than one!)

1. french fries (made at home in the oven, topped with salt and a little Old Bay and dipped in the slightest amount of ketchup)

2. ice cream (preferably strawberry, but in a pinch any other flavor will do)

I'm going to be huge!

When I was pregnant with Charlotte, I had a lot of different cravings. Usually I would crave something for about a week, eat a ton of said craving, and then move on to the next food. My cravings included onion rings, strawberry ice cream, smoothies, BLT's,  hash browns, blueberries, etc.

One week we had french toast for dinner every night.

During the 'morning sickness' phase of pregnancy, I don't really worry too much about the nutritional value of what I am eating, I just focus on actually eating anything and keeping it down.

Last time the sight of raw chicken would turn my stomach something terrible, but I really wanted cooked chicken, so Tim was relegated to chicken duty for awhile. The other day, I spent a few moments in the meat department in the grocery store, trying to force myself to inch over to the poultry section and pick out some chicken, but in the end I gave up and headed to the frozen french fry aisle. I'll let that be a battle for another day!

This pregnancy, I have to eat pretty much constantly to keep the nausea at bay. Since the last thing I want to do when I am nauseous is eat something, this has proven to be challenging. During my last pregnancy I got in the habit of carrying around a bag of food with me. I never knew what would make me queasy on any given day, so I stocked it with everything I imagined might be okay to eat.

If you've never had morning sickness, let me describe it to you. It feels exactly like motion sickness. Exactly. Most of the time you feel just nauseous enough to not throw up. You feel it in your head, the back of your throat and deep in your stomach. When you have the flu and you throw up, you feel better. Not so with morning sickness. You throw up and then you feel the same. So, it's totally not worth it!

At least that is how it feels to me. The only thing that helps is eating and sleeping. So I try to do both whenever I can. The sleeping part is hard to pull off with a 12 month old at home.

Early on Tim and I had a discussion about what to call this baby until it is born. If you remember, Charlotte was known as Shlomo for the duration of my pregnancy. Tim never liked the name, but I caught him calling the baby Shlomo towards the end. Good thing Charlotte was a girl or she might have had a hard time shaking the name Shlomo! This time around someone recommended "Shlomo-dos," which I like the sound of, but I doubt I can get Tim to sign off on that!! At first Tim wanted "Bambino" and I wanted "Chibi." I think we may have settled on "Chapter 2," but it is still a little too early to tell. If you have any recommendations for nicknames, pass them on! I will discuss them all with Tim and we will hopefully come up with a name we can both agree on!

And to finish out this blog post... Here's a picture of Charlotte and a dog. Enjoy! 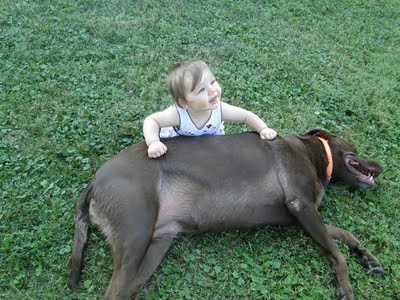